The Kvinna till Kvinna Foundation office in North Macedonia each year traditionally marks the International Women Human Rights Defenders Day to pay tribute and celebrate all the women who defend women’s human rights and stand for equality. This year’s FemDefenders—“Challenging the Norms” event was held on 21st December in Skopje, North Macedonia.

The event was opened by Biljana Dzartova Petrovska from Sida/Swedish Embassy in Skopje who stressed that “Achieving gender equality and recognizing the needs of the marginalized groups is a matter of providing basic human rights, securing functional democracy and functioning legal system in the country.” Kvinna till Kvinna also used the opportunity to present the “Challenging the norms” publication, recently translated into Macedonian. 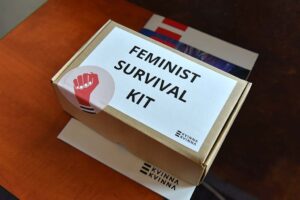 The panel discussions were intense and deep, as four amazing women activists shared their stories and testimonies that illustrated their daily struggles in the fight for a better life. 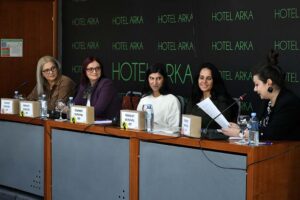 Fight for a better life—survivor stories

Roma activist from the Roma Women Advocacy Group (supported through our partner organisation HERA) stressed that Roma women are discriminated against more than any other group, facing discrimination both for their ethnic origin and their gender. She also said that the educational inequalities affecting Roma women also decide their employment outlook, adding that this represents the key factor behind labour market gaps. Today, Suda is a student at the Pedagogical Faculty in Skopje and her dream is to become a teacher and set an example for young Roma girls.

Representative of Radika-De Debar (WCSOs sub-granted by our partners Akcija Zdruzenska) shared the efforts of the organisation to increase financial independence for women from different ethnic minorities. “These women are extremely gifted and produce different handmade crafts,” Fadrija said. “But the fact that they live in a geographically isolated and remote mountain area, where patriarchy is very much alive, marketing opportunities of the goods they produce are extremely limited.” Despite this and with great support offered by Radika-De, Fadrija said, women are truly motivated and better self-organised to produce and sell their products.

Duty-bearer supported by our partners Glasen Tekstilec Stip (an organisation protecting workers’ rights) is a textile worker. She approached Glasen Tekstilec during the Covid-19 pandemic, when her former employer fired her from work because she as a single mom took a few days off from work to care for her sick child. Meanwhile, Ruzica became an activist herself and joined Glasen Tekstilec WEE programme.

Representative of APCP—Association of Persons with Cerebral Palsy and Other Disabilities described the numerous challenges for women and girls with disabilities, from access to education, over social and health services, and housing to employment. The list is inexhaustive, according to Daliborka who added that “Systemic solutions are key, but until they are in place, APCP is filling in all the gaps for the institutions.” The organisation is running group (care) homes for persons with disabilities where people in need receive much needed services.

Feminist Peace—Alternative Narratives and Solutions in a Changing World