Last week, representatives of The Kvinna till Kvinna Foundation’s programme “EU for Whom — Women’s Rights and Participation in the Western Balkans”, together with members of partner organisations visited Berlin, Germany to advocate for women’s rights and gendered European Union accession processes in the six pre-accession countries of Western Balkans. The delegation received the opportunity to present their work and demonstrate efforts invested over the years in improving the position of women in the region. They especially addressed the underrepresentation of women in the EU accession process.

Kvinna till Kvinna and representatives of partner organisations from all six countries visited the Bundestag (Federal House of Representatives)—the German Parliament Committee on European Union Affairs and met with representatives of the German Foreign Ministry, and the Ministry for Economic Cooperation and Development. They also met with representatives of the Open Society Foundation and the Heinrich Böll Stiftung, and visited the Swedish Embassy to the Federal Republic of Germany. The team was very well received and representatives of both, German institutions, as well as of civil society organisations were very interested in hearing what the Western Balkans delegation had to say. Everyone underlined Germany’s great interest in the region. In addition, with the German Government’s Feminist Foreign Policy in place, there is an increased focus on women’s rights.

The team also used the opportunity to emphasise the role of women’s civil society organisations (WCSOs) in EU accession processes in the region and in areas such as peacebuilding, democracy and rule of law. They referred to the fact that WCSOs have been leading the work on the very subject matters that are at the centre of the EU-integration process, which makes them strategic allies to the EU in the region. 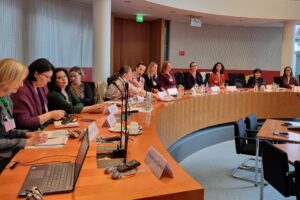 Speaking to MPs from the Parliamentary Committee on EU Affairs, the team addressed the fact that men are overrepresented in political decision-making processes in the Western Balkans, while women tend to engage “politically” through the civil society. Since men are predominantly in institutional political decision-making positions, this means that women are largely excluded from the EU integration process in the Western Balkans and the EU therefore mainly engages with men. This is both a democratic problem and a missed opportunity. Therefore, a strong recommendation from the Western Balkans team is that the EU actively reaches out to WCSOs for consultations and dialogue, in order to get a more accurate picture of the situation in the countries. This is stipulated in the EU’s new Action Plan on Gender Equality and Women’s Empowerment in External Action 2021–2025 (GAP III) and thus already an EU commitment that needs to be acted upon.

The visit was a first contact opportunity in Germany, which is an important EU member state, and the positive responses the team received in the meetings give a promising future outlook.