A radio station reducing cases of violence against women. Eleven brave women paving way for women’s political participation despite challenges and threats. That is some of the committed work of Congolese women’s rights organisations that Petra Tötterman Andorff, our secretary-general, witnessed as she visited our partner organisations in the Democratic Republic of the Congo.

In September Petra Tötterman Andorff visited the Democratic Republic of the Congo. She met with partner organisations from the provinces of South Kivu and North Kivu. 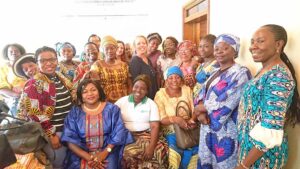 The Kvinna till Kvinna Foundation’s Secretary-General Petra Tötterman Andorff together with women politicians and potential candidates who are being mentored by our partner organisation Women’s Peace Caucus in the DR Congo. Photo: Kvinna till Kvinna/Judith Maroy

One of the organisations visited was Caucus des femmes pour la paix. The organisation works to strengthen gender equality and peace through women’s political participation and decision-making. During her visit, Petra was given the opportunity to listen to the stories of eleven women from both urban and rural areas who are holding or candidating for political positions.

“Their stories show the picture of these brave women’s force and courage, despite the challenges and threats they encounter”, says Solange Lwashiga Furaha, executive secretary at Caucus des femmes pour la paix.

A must was to see the studio of Mama Radio—the community radio station of AFEM. In an exchange with local activists the work of AFEM, using radio as a tool to strengthen women’s right and combat violence against women, was evaluated. The method has proven to be successful, and the participants could report on a decrease in cases of violence against women and girls as well as of sexual violence in their local community.

To be the change

Petra Tötterman Andorff expresses a deep appreciation for the work that is being done by Kvinna till Kvinna’s partner organisations in the Democratic Republic of the Congo. She highlights how both women and men engage in the fight for women’s rights and against all forms of violence.

“They are committed to being the change they want to see in their community”, she says.

Whether it regards gender-based violence, reproductive health, or lasting peace, there is a growing awareness among both women and men in the Congolese society of the power they each hold to be a part in achieving gender equality and peace. And Petra Tötterman Andorff stresses that they are not alone:

“There are women all over the world constantly fighting for women’s rights. Together we can push the agenda for gender equality and feminist peace!”

“Happiness for me is speaking out and standing up for myself”