“Empower Rwanda gave me a voice”

When she got pregnant at the age of 15, Honorine almost didn’t feel human anymore. Thanks to the support of Kvinna till Kvinna’s partner organisation Empower Rwanda she has now re-discovered her self-worth and is back in school.

“I had so many thoughts when I learned that I was pregnant.”

Honorine, who is now 17, recalls the time two years ago when she learned that she was pregnant.

“I thought about having an abortion,” she says. “But I didn’t know how, where or if I’d even have the money to do such a thing. I had no information.”

Honorine’s situation is far from unique in Rwanda, where teenage pregnancy continues to rise. Lack of comprehensive sexuality education as well as a high level of gender-based violence are two root causes. Honorine got pregnant after an older boy at school raped her.

“He was 18 and used to help me with my studies after school. One day, he said: ‘Let’s not study today, let’s just talk’,” explains Honorine and says that she did not give him her consent.

Many teenage girls are left without any support when they become pregnant, as it is considered a huge shame to the family to have an unmarried, pregnant daughter.

“When I got pregnant, my father blamed my mother: ‘Our daughter is a shame, she is stupid, you should have done a better job in raising her.’ They abused me constantly, calling me names and sometimes beating me. I used to have to sleep outside. It was like that for a while, before my parents calmed down,” says Honorine.

When we meet, she is attending a training on sexual and reproductive health and rights run by Kvinna till Kvinna’s partner organisation Empower Rwanda. It is part of the programme “Her Voice, Her Right” which aims to empower teenage mothers.

Honorine joined the empowerment programme seven months ago. She learned about the opportunity to receive training and support from Empower Rwanda through a health worker in her community.

“I heard that Empower Rwanda was looking for teenage mothers from poor families for a programme. Hearing someone say that they are there to meet you and do something for you­­, it moved me,” says Honorine.

She decided to join. One important reason was that she wanted to learn about sexual and reproductive health and rights. In Rwanda many youths don’t get  comprehensive sexuality education. As a result, they are un-aware of their rights, such as the right to abortion, which is legal if you have been raped. Furthermore, all sexual relations with minors (under the age of 18) is considered non-consensual.

Going back to school

The trainers at Empower Rwanda strongly encourage the girls to go back to school. Once you drop out, however, re-enrolling isn’t easy. Especially if you have a new-born baby to look after.

“Empower Rwanda had training sessions with my parents. After those, they have accepted helping me with baby-sitting, so that I can be in school,” says Honorine. 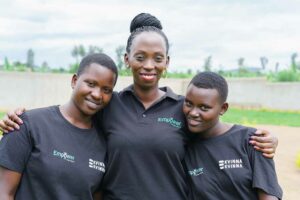 “Empower Rwanda also helped us talk with the school, so that they could better understand our situation. When I first re-enrolled, I didn’t have a uniform, no books, nothing—and the school still accepted me. Gradually, I’ve been able to pay for those things. Sometimes Olivia [founder of Empower Rwanda] helps me out when I can’t pay for the food in school. She calls the school and asks them to go easy on me, that I’m trying to find the money. Sometimes, she even pays.”

Honorine has high hopes for herself and her daughter:

“I want to graduate and be a businesswoman. So that I can provide for myself and my child. I want to be able to put my child through school and I want to be a good parent—I want to teach my daughter about her body, sex and what reproductive rights she has. Because I don’t want her to go through the same things as me.” 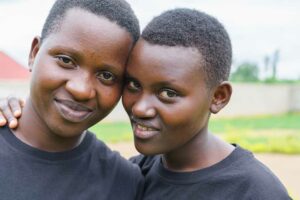 Lea, 18, and Honorine, 17, have gotten to know each other through Empower Rwanda’s programme “Her Voice, Her Right”. Photo: Gloria Powell

Having suffered from sexual abuse, being stigmatised by your family and forced to give birth young, traumatises many teenage girls. Honorine says that being part of the programme has helped her heal.

“Empower Rwanda has helped healing me. My self-confidence, my self-image—the way I saw myself after becoming pregnant. Now, I’ve gained confidence and I feel like a human being again, which I didn’t when I got pregnant,” she says.

She also wants to give back to the community and teach more girls about what she has learned, like the laws that are in place to protect girls like herself.

“Empower Rwanda gave me a voice. Now I am able to advocate for myself. Now, I can’t be abused as easily, because I would know where to go. I feel confident to report and know where to report.”

“I no longer feel alone”