“I no longer feel alone”

When Theodette was only 16, she was raped. Soon after, she learned that she was pregnant. She was left completely on her own, without support, until she joined a programme to empower teenage mothers.

It happened late in the evening. Theodette, who was only 16 at the time, had been at an away game with her school football team. She was walking home alone in the dark when she was attacked and raped by a stranger. Later, she found out she was pregnant.

“From the moment I learned I was pregnant, I worried constantly. I didn’t know who to talk to because my mother had died. If she had been alive, I might have been able to talk to her,” says Theodette.

In Rwanda, many families consider a pregnant, unmarried daughter to be a huge shame and disown her. When Theodette’s father and his new wife found out what had happened, they threw Theodette out of the house. She had to go live with her grandmother who, once the baby was born, began mistreating her. 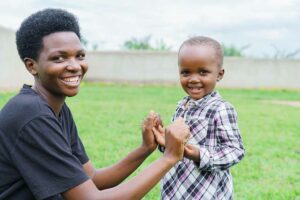 During the interview, Theodette’s daughter is playing in the grass. Photo: Gloria Powell

Enrolling in an empowerment programme

It was from another teenage mother that Theodette learned about a programme run by Kvinna till Kvinna’s partner organisation Empower Rwanda.

Through their programme “Her Voice, Her Right” Empower Rwanda aims to reach a total of 400 teenage mothers in Rwanda to strengthen their sexual and reproductive health and rights and to protect them from further gender-based violence. Empower Rwanda works closely together with local authorities for health care and justice services to support young mothers in the best possible way.

Theodette has now been a participant in the programme for seven months. Through the trainings she has received she feels more confident about speaking out about the issues she is facing and standing up for herself.

“One important thing was learning about my own body and gender-based violence. I wish I had known what I know now, before I got pregnant. When I was raped, I didn’t report it or tell anyone at home what happened to me,” says Theodette.

She also says that one of the best parts about being part of Empower Rwanda’s programme is the feeling of no longer being alone. At the activities, where she meets other teenage mothers, she feels listened to and understood. 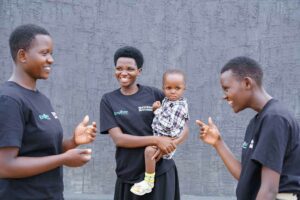 Theodette and her daughter (middle) together with other programme participants Lea (left) and Honorine (right). One of the best things about the programme, according to Theodette, is that she no longer feels alone. Photo: Gloria Powell

Saving up for a business

The programme is aimed at teenage mothers from some of the poorest families in the country. To be able to attend activities, such as trainings on sexual and reproductive health and rights, the participants are granted a small sum for transportation means.

Out of this allowance, Theodette has been saving whatever she can. Sometimes she has walked for hours with her daughter on her back. With the money, she has started a small business, growing beans and eggplants. This provides food for her and her daughter, but she can also sell the surplus. Theodette has finally been able to move out of her grandmother’s place. She now rents a small house on her own.

Hoping to go back to school

Theodette’s highest hope is to be able to return to school which she was forced to drop out of when she got pregnant. She is grateful for the encouragement from Empower Rwanda to go back to school—even though it is very difficult.

“I would love to go back to school. I want to make something out of myself. But it isn’t easy, I don’t have money to be able to go to school and I can’t leave my daughter,” says Theodette.