Lea was only 15 years old when she got pregnant. Forced to drop out of school and treated differently by her parents, she became isolated. But thanks to an empowerment programme for young mothers, she is finding her way.

We are sitting in the grass outside of a shaded assembly hall. The sun is blazing. It’s nearing the end of the rainy season in Rwanda and there are patches of blue sky above us. In the background, voices of small children playing and occasionally a baby crying can be heard. We are in Nyagatare district, just over three hours’ drive north-east of Kigali, not far from the border of Uganda.

Lea, who is a participant in Kvinna till Kvinna’s partner organisation Empower Rwanda’s programme for teenage mothers, is telling us about when she found out that she was pregnant.

The man who raped Lea told her that they needed an abortion, and that he knew of a male nurse who could do it. The cost—RWF 85,000 (about USD 80)—would be split between them.

“I stole 40,000 Rwandan francs from my parents and gave it to him. But he lied. He ran away with the money,” says Lea.

Too scared to tell anybody, Lea continued to go to school as usual and tried to hide her growing belly. When she was seven months pregnant, her parents began noticing. She decided to tell them the truth. They had a very hard time accepting what had happened but tried to help her.

“I had to drop out of school. It felt like everything I had ever wanted suddenly was out of reach,” Lea says.

Lea reported the rape to the police authorities. Her case went to court and Lea’s parents supported her with money for legal representation.

“But they couldn’t move forward with the case. Eventually, I gave up on ever having justice. My parents also felt that I was wasting the money and should use it for something that could benefit me and the baby in the future. So, I got some training in tailoring. That’s what I do for a living now,” says Lea.

Enrolling in the programme

The health centre where Lea gave birth had saved her contact information. When Empower Rwanda, in collaboration with local authorities, were looking for participants to their empowerment programme for teenage mothers, they reached out to her.

Lea was instantly intrigued by the programme, which was dedicated to teaching young mothers about their rights and opportunities and strengthening them in re-building their lives.

“The trainings changed my relationship with my parents. When I became a mother, they no longer saw me as a child. They treated me different than my siblings. Empower Rwanda talked with my parents, and they have now accepted me as their daughter again,” says Lea. 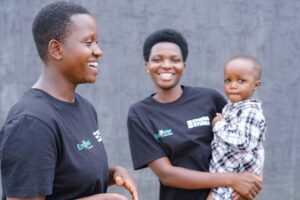 Lea (left) together with another programme participant: Theodette and her daughter (right). Photo: Gloria Powell

When asked what the best part about the programme is, Lea answers without hesitation:

“The best part for me is that I used to feel so lonely, I was able to come out of hiding. The programme completely changed how I see myself and feel about myself.”

She also has a clear vision for the future:

“I want to put my baby through school. I want a future where no girl gets pregnant the way I did, underage. I want to be the person to support other girls in learning their rights, their options, the laws that are there to protect them.”