Haven for women in Rwanda

They have been going since the 90s—and have no plans to stop. Women’s rights organisation Haguruka in Rwanda provides women with legal supports and meets many victims of gender-based violence.

Women’s rights organisations across the globe have certainly been kept busy during the covid-19 pandemic. With long and persistent lockdowns, many women subjected to gender-based violence were suddenly even more at the mercy of their abusers.

“The covid-19 pandemic demonstrated that women are still far from controlling vital resources in the home. When they were locked up at home with their husbands, who were sometimes their abusers, they were not allowed to use money, property or anything without the consent of their husband. Imagine that you want to report an abuser and you have to ask him if you can borrow the phone,” says Ninette Umurerwa, national executive secretary at the women’s rights organisation Haguruka in Rwanda.

Haguruka, which translates into “stand up” in Kinyarwanda, has worked for women’s and children’s rights and their access to justice since 1991. When looking at the injustices women in Rwanda suffer today, a majority are victims of domestic violence or any other form gender-based violence (which can be physical, psychological, economic or sexual, according to Rwandan law).

One example of how Haguruka works, is by coordinating a network of 416 paralegals across the country. That’s the number of geographical sectors in Rwanda and it’s no coincidence: Haguruka wants to have representation in the whole country. The head office is located in Kigali, capital of Rwanda, and Haguruka also has four regional offices to which paralegals can refer cases.

Ninette Umurerwa, who leads the organisation and is a lawyer by profession, explains their approach:

“These community volunteers are not lawyers by profession, they are paralegals who have been rigorously trained on different laws that can help them support women, children and the community at large. We can’t be everywhere, especially not at village level. That’s why we need to empower a community-based facilitators to help us identify injustices that are still persisting for women.”

Ninette is very satisfied by the set-up of the legal network and its results. It’s not only sustainable but also ensures women and children on village level are represented. 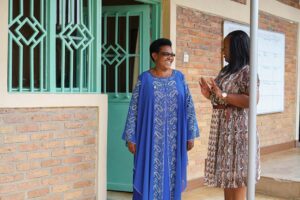 Ninette Umurerwa (right) together with Christine Mukarukwaya (left), one of Haguruka’s volunteer paralegals, at the head office of Haguruka in Kigali. Photo: Gloria Powell

That became even more important during the lockdowns of the covid-19 pandemic.

“In Haguruka, we recorded a 75% increase of cases of violence during the pandemic. What’s so great about the paralegals is that they were able to be out in the communities during this time, while us lawyers were locked up at home only working over phone. Paralegals out in the communities could knock on doors to visit women who were being abused. And they used our free hotline to ask us for advice: ‘In my village I have this case; what can I do about it?’ They contributed a lot. Over 100 cases during the first three months of lockdown were recorded by paralegals alone,” says Ninette.

Deprived of her home

One example is how the team helped Zilipa, a victim of economic violence, get her house back. Zilipa had lived with her partner for more than ten years. They bought a piece of land, built a home together and had three children. After ten years, Zilipa’s partner broke up with her. Since she had nowhere to go, Zilipa asked if she could have the house. But no.

“He told her that she could stay under the condition that she moved into a smaller hut on their premises and that she had to cook for him and his new girlfriend,” says Ninette. 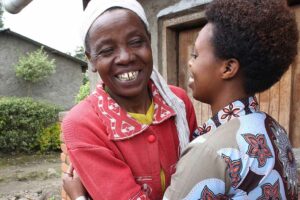 Zilipa and the children had to crowd in the small building and without proper child support, she wasn’t able to send them to school.

“One day, at a community dialogue activity supported by Kvinna till Kvinna in Musanze, Zilipa learned about Haguruka. She walked four kilometres from her village Kinigi to meet our lawyer, Blandine Ibereho,” says Ninette.

Haguruka took Zilipa’s case to court—and won. The judge decided that Zilipa and the three kids should have the house back and the husband and his new girlfriend should take the smaller house, since they didn’t have children.

Ninette goes on to explain how important cases like these are—not only for the victim involved, but for so many other women. It sets a precedent and sends a message to other perpetrators in the area.

“It’s always good support a victim of gender-based violence and see the impact it has for the individual. But it also creates a ripple effect for society at large. In that sector, men who are living with their partner in a de facto union, now know that even if they decide to separate, they will not just be able to throw women out with nothing but luggage. The assets will be shared equally,” says Ninette who goes on to explain that an article in the law on gender-based violence states that assets should be shared according to how much each of the partners contributed.

In addition to law, Ninette also has a degree in gender studies.

“I think it’s a nice combination. Sometimes, lawyers are not considering other aspects than law. But with gender skills, I think you try to understand how women differ from men. When you want to help them accessing justice, there are details you need to consider. You have to be patient and listen to their story.”

She says that the persistent patriarchal norms of society are what motivate her to dedicate her work to supporting women—and why Haguruka still focuses on women, thirty years after it was founded.

“We have laws, policies and even political will to support women. But they are still being abused. Still being harassed,” says Ninette.

She goes on to explain that women who experience violence need a safe space to go to, someone they can trust. Sometimes, they even need shelter, which Haguruka provides for them. Being a women-led organisation with legal competence allows Haguruka to be the go-to place for victims in need. 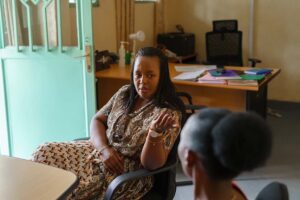 Ninette Umurerwa together with one of the women, Lawrence, receiving support from Haguruka. Without their legal assistance, Lawrence still wouldn’t have had the child support she was entitled to. Photo: Gloria Powell

Since Haguruka started working together with The Kvinna till Kvinna Foundation, they have been able to organise so called “safe spaces” for women, where women out in the communities, can come to talk about their issues.

“It’s important because gathering women helps us to understand what problems we are still facing in Rwanda—regardless of what laws and policies stipulate. Through the safe spaces we have dialogues with women from the community to understand what their needs are, what kind of injustices they are facing and why,” says Ninette.

She also says Kvinna till Kvinna’s approach, where women’s rights organisations explain what they think is needed most in their country, is one they like.

“It’s always easier to implement something that you have built and believe in yourself,” says Ninette.

Kvinna till Kvinna has supported women’s rights in Rwanda since 2017. One of our partner organisations is Haguruka. Haguruka focuses on ending violence and provide a safe, confidential spaces where citizens will be listened to and given legal support by lawyers and counsellors. Read more about our work in Rwanda.

Victims and survivors of violence in Zenica are not alone

#MeToo—five years of breaking the silence on social media