The report serves as a benchmark for the six Western Balkan accession countries regarding women’s rights and influence, for comparisons over time. The four areas included in this benchmark are women in politics, gender-based violence, security of women human rights defenders and women in the labour market. The report analyses current trends and provides recommendations to national governments and the EU.

All the Western Balkan countries have the accession to the European Union high on their political country agendas. This creates an opportunity for The Kvinna till Kvinna Foundation to influence decision-makers in the region, particularly through EU’s enlargement policy, targeting the respect for women’s rights and improvement of the overall situation for women in the EU pre-accession countries Albania, Bosnia and Herzegovina, Kosovo, Montenegro, North Macedonia and Serbia. It is a key demand advocated for by Kvinna till Kvinna and our partner organisations towards EU member states and EU institutions.

At the same time, partner organisations continue to work on influencing governments in the Western Balkans to improve laws and to prioritise gender equality, and women’s human rights. However, development is slow, as among other reasons, the civil society, who are the key actors in demanding change in the region, are often not heard or included in democratic decision-making processes. 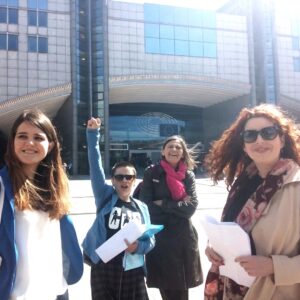 Gender-based violence against women, gender discrimination in the labour market, limited opportunities for women to participate in politics and ethnic tensions that have persisted since the wars in the 90s, are widespread issues in the region. Kvinna till Kvinna’s regional EU advocacy programme “EU Accession for Whom? — Women’s Rights and Participation in the Western Balkans”, which covers all six pre-accession countries, secures new opportunities and channels to pursue improvement of issues at stake.

The programme aims to secure women’s rights and equal participation in decision-making in the Western Balkans, with a specific objective of gendering the EU accession process. It is implemented in close cooperation with women’s civil society organisations whose experience and efforts in areas such as peacebuilding, democracy, rule of law and inclusion of women in the EU accession processes in the Western Balkans are key for furthering the position of women in the region.

Part of their advocacy efforts to improving the situation for women in the countries include regular advocacy visits to EU institutions, meetings with decision-makers and other key actors in Brussels to express demands and share opinions. The work and expertise of women’s rights organisations has come to be highly recognized among key actors in Brussels and relevant EU institutions.

Our joint expertise in matters of gender equality and women’s rights is requested, which is a great achievement. Advocating for women’s rights, gender equality, peace and democracy in Brussels and beyond is crucial for the advancement of the rights and well-being of all women in the region and we work determinedly to make a difference.

Feminist Peace—Alternative Narratives and Solutions in a Changing World