The Kvinna till Kvinna Foundation’s advisor on women’s economic empowerment paid a visit to Washington to attend the 2022 annual meetings and the civil society policy forum of the International Monetary Fund and the World Bank Group. Here are some of her reflections!

What sessions and meetings stood out to you during the week?

“The panel on the IMF’s (first ever) gender strategy organised by civil society stood out. It was interesting to hear the director on gender, Ratna Sahay, point out that the strategy is ground-breaking by making gender a macro-critical issue, the push for closing gender gaps (particularly in the labour market) and that it is strongly anchored with the board and management within IMF.”

“The critique from civil society organisations is clear arguing the lack of human right’s language, that women are seen as instruments for economic growth and the paradox that IMF’s politics of austerity (cutting public sector spending) in itself has the impact that it increases inequalities and hits women the hardest. Several reports on how women are used as ‘shock absorbers’ in times of crisis were presented. “ 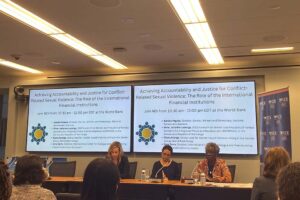 The panel on achieving accountability and justice for conflict-related sexual violence and the role of IFIs. Photo: The Kvinna till Kvinna Foundation/Monica Erwér

“Another important event was on ‘Achieving accountability and justice for conflict-related sexual violence: the role of IFIs’. Julienne Lusenge, women’s rights activist from the Democratic Republic of the Congo, spoke on the necessity of long-term support for women’s organisation specially on grassroot-level, to address the root causes of violence such as the toxic norms of masculinity and power relations and to work with prevention. Research shows that IFIs need to relate to the existing institutional framework of resolution 1820 and push to operationalising on the ground. The World Bank showed how they increased the number of projects, staff, and awareness of gender-based violence.”

“I also met with Caroline Bahnson at the fragility, conflict and violence unit at the World Bank Group, who gave me a good overview of their work and highlighted the cooperation with United Nations Development Programme on ‘Pathway for Peace: Inclusive approach for preventing violent conflict’ which impacted the bank to increase the work on prevention, internally displaced people and to strengthen their gender approach.”

What reflections are you taking with you home?

“There are multiple global crises—food and energy crisis, the war in Ukraine, climate crisis and economic recession. Inequalities and poverty are increasing and the future seems rather bleak.  The World Bank and the IMF are gigantic institutions with power and money and are able to set much of the world’s economic agenda. The austerity politics in terms of public sector reforms that cut social spending has proven disastrous consequences and increases gender inequalities. Within some parts of the IFIs, particularly the World Bank, work on social protection and safety net are increasing not the least as a reaction to the consequences of covid-19, which give some hope if turned into actual operations.”

“There is high competence and strong advocacy and resistance among civil society organisations to push for changes in the global unequal structures. However, there are very few women’s rights organisations that are taking part and driving advocacy from a feminist standpoint. The Kvinna till Kvinna Foundation and partner organisations’ voices, meaningful participation and influence are critical at these decision-making arenas.”

What message would you like to send to the World Bank and the IMF?

“The World Bank and the IMF need to take urgent actions to change their politics of austerity and restructure the debt burden for low and middle-income countries. The institutions need to translate the rhetoric of gender strategies and policies to the operations at country level and increase resources to staff and programmes.” 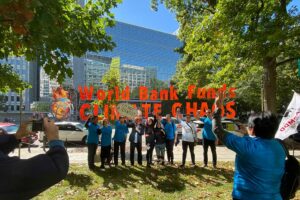 Action on climate justice, outside of the venue of the 2022 annual meetings of the Word Bank and the IMF. Photo: The Kvinna till Kvinna Foundation/Monica Erwér

“They need to be more transparent about procedures and decision-making processes. Consultations with civil society need to increase and improve by actually listening and considering critical evidence from ‘the reality on the ground’ particularly for women, on the implications of the loans and programmes. Unpaid work, the care economy and necessity of social protection systems must be recognised and included in programmes.”

“CSOs produce lots of research reports, recommendations and alternatives to ‘common ways’ of operation of the World Bank and IMF —which should be integrated to make a shift to a green gender equal inclusive and just development happen.”

Monica Erwér works as an advisor for women’s economic empowerment at The Kvinna till Kvinna Foundation. She has been with the organisation for six years.

One of our thematic areas

The unequal distribution of and access to financial assets is a major barrier to equality, as it prevents women from entering politics, escaping abuse and influencing decisions that impact them. Learn more about our work for economic justice and women’s economic empowerment.